Like many people across the world, I’m using my quarantine effectively: by catching up on all the video games I wasn’t able to play while traveling. The game at the top of my list? Spider-Man, which was widely recognized as one of the top games of 2018. The game is features an open-world, which means you can travel around the game map as you see fit. And since Spider-Man, canonically, lives in real-life New York City, this means you’ll spend hours webbing around an incredibly detailed version of the city that never sleeps.

If you’ve spent any appreciable amount of time in New York, the in-game world will immediately feel familiar. The developers nailed the look and feel of the city. I found myself using real-world landmarks to orient myself as I slinged (slunged?) across Manhattan. The game leans into this realism—it even includes a challenge where you can take photos of in-game landmarks. While some are unique to the Marvel universe, like Avengers Tower and Uncle Ben’s grave, many exist in the real world and are faithfully reproduced within the game: Williamsburg/Brooklyn/Manhattan/Queensboro Bridges all make an appearance, as does Grand Central, Madison Square Garden, Saint Patrick’s Cathedral, Columbus Circle, the High Line and many more points of reference. As you’re swinging through the city, you’re treated to great views of Manhattan’s skyline, anchored by the Empire State Building, Chrysler Building, and Freedom Tower. Except, it’s not the Freedom Tower, despite being located in the exact same location as its real-life counterpart. Why are equally famous buildings like the Empire State Building accurately depicted, but the Freedom Tower isn’t?

Here’s what the “Freedom Tower” looks like in the game: 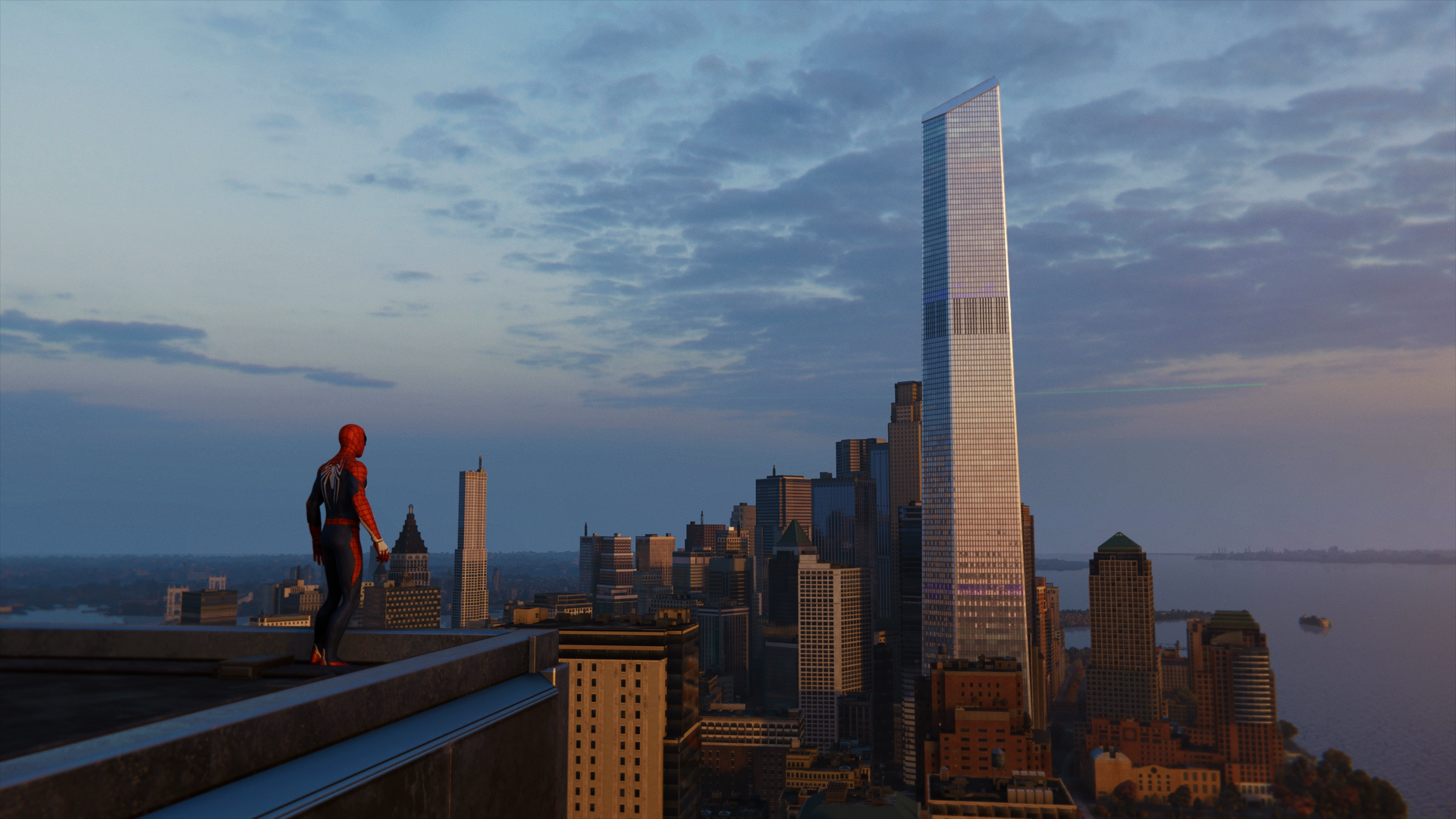 Interestingly enough, the in-game design looks to be based on Libeskind’s original design for Freedom Tower (an interesting recap of the changes can be found here), lending further credence to the theory that this building is supposed to be 1WTC.

My curiosity was further piqued when I learned that the real One World Trade Center was actually in the game during a demo at E3 in June of 2018, less than 4 months before the final game was set to be released to the public!

This deadline is even closer than it appears at first glance as the “gold master” is finalized weeks before release date so manufacturers have time to make and distribute the game to retailers. This change must have been implemented at the 11th hour.

And even after swapping the model out, they featured the building prominently on the home screen in the released version of the video game! 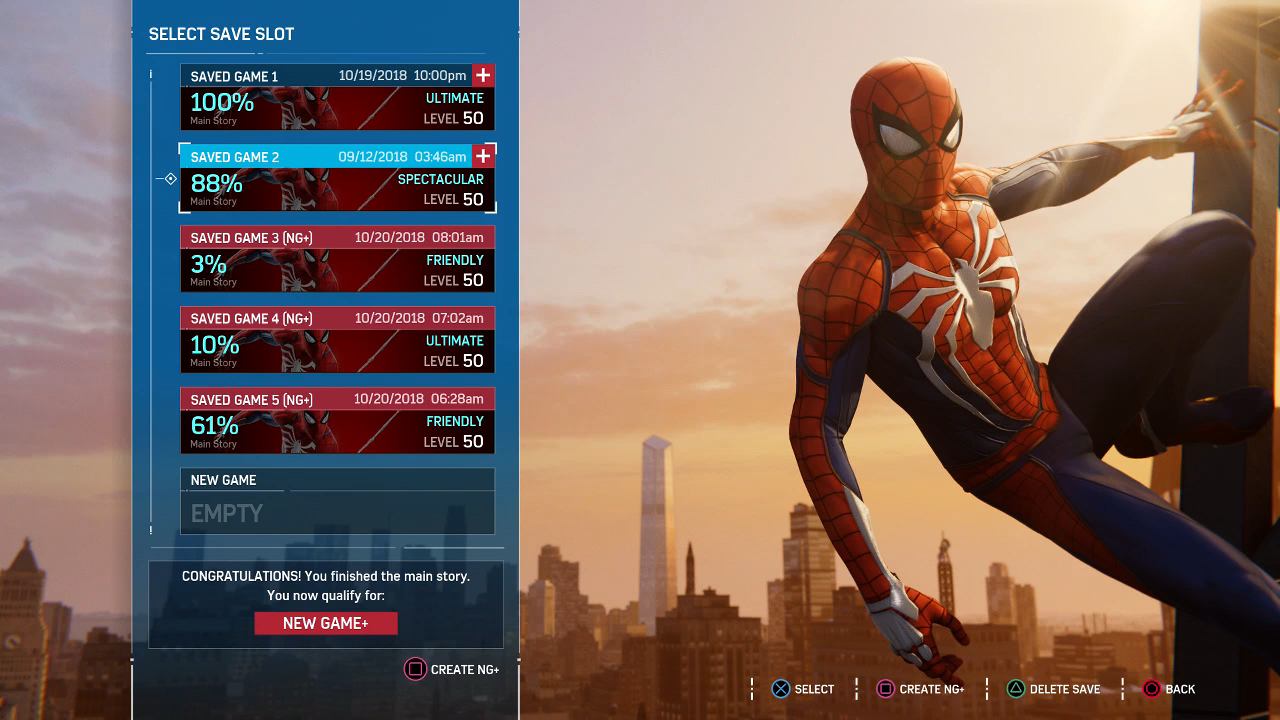 So why isn’t the real-life 1 WTC featured? At this point, we can eliminate time and budget constraints because we know the model already existed and was implemented before launch. We know that the designers thought this building was important as it’s the first thing you notice when starting the game.

I wish to briefly introduce Buccini’s razor—if something fun disappears unexpectedly, the cause is litigation (real or imagined).

At this point, I had a strong feeling copyright law was the reason for the change. The internet seems to agree.

As luck1 would have it, there was an expert in architectural copyright right around the corner from my house here in Greensboro! Jeffrey was kind enough to spend a few minutes of his time thinking about this not-at-all-important question.

First, Jeffrey noted that copyrights expire. Just as music and books can pass into the public domain for anyone to replicate freely, you can also build an exact replica of the Empire State Building here in the United States if you so choose. Generally, any building constructed after December 1, 1990 is covered by the Architectural Works Copyright Protection Act. This would explain why older structures are replicated faithfully but the Freedom Tower is not.

However, this doesn’t tell the full story. As Jeffrey noted, 17 U.S. Code § 120(a) “provides an exception related to pictorial representations of of buildings that are visible from a public place. Therefore, I am not sure exactly why they changed it in the video game.”

The final piece of the puzzle lies at the end of the credits, where the creators of the game specifically thank the owners of certain famous buildings in New York, including the Empire State Building. I found this curious as the Empire State Building should be doubly safe: it was constructed long before 1990 so it is not covered under copyright law, and it is visible from a public place so it should be exempt from any potential copyrights. But look closer. You’ll see that they are acknowledging the trademark holders, NOT the copyright holders.

As this page helpfully explains, applying a trademark to the building limits how the building’s image can be used in the sale of goods and services (like video games)! The credits hint that the video game creators obtained limited licenses to use the trademark, i.e. the distinctive design and appearance of the building, for certain buildings such as the Flatiron Building.2

Therefore, the most likely answer is that the distinctive shape of 1 World Trade Center is either trademarked (although I could not find it within USPTO databases) or is so recognizable that it is easily defensible via a common law trademark and the game developers were unable to secure a license to use the trademark before their deadline.

However, Sony just announced an expansion to the Spider-Man video game, so perhaps the additional time and the demonstrated popularity of the first installment will help resolve this issue for the upcoming title.