On the internet, curation is currency. Each year, I spend $120 on Spotify. The vast majority of that value is provided by Discover Weekly, an algorithmically-generated playlist that refreshes each Monday and is full of insanely accurate suggestions. As someone who tends to listen to the same song over and over until I find a new song to replace it, Discover Weekly is what keeps me on Spotify. That’s the power of a strong, algorithmic recommendation engine.

Other companies have built huge businesses on top of fantastic recommendation engines, Netflix and Facebook being the most visible examples. TikTok, in particular, became the hottest company in the world primarily due to the strength of its algorithmically-generated “Recommended for You” feed.

Human curators (whether individual influencers or grouped under a brand like Wirecutter) can also wield immense levels of influence and can generate eye-popping amounts of money. While their recommendations might not be as narrowly-tailored to you, specifically, as compared to algorithmic engines, the internet gives them a much wider audience and that scale enables profitability.

When it comes to content curation, there are two primary axes: freshness and visibility. 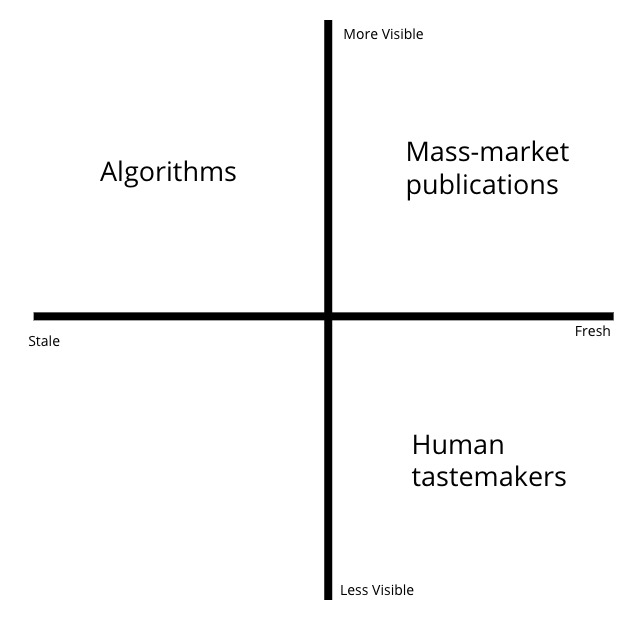 This should make intuitive sense. On the bottom right, we have the tastemakers: influential humans who define trends, often by sifting through the latest products or ideas and identifying those with promise. Once a trend has reached a certain level of momentum, it is often picked up by mainstream media (commonly called “trend pieces”, often exemplified by the WSJ’s A-Hed).

Most algorithmic recommendation engines are powered by “collaborative filtering”. This algorithm requires a corpus of user interests as input so it can take some time for the latest trends to filter into user preferences and, in turn, be promoted to an audience at large. There are some ways to mitigate this lagging indicator—you can use heuristics, like genre or creator, to get an intial sense if a user would like some new piece of content. But these algorithms really shine once content has disseminated throughout the larger userbase and can be compared against other pieces of content.

That leaves us with what I think is the most interesting quadrant—the bottom left. What happens when you have older, low-visibility content? You might ask why this quadrant is even interesting at all, and that would be a fair question. Certainly, for certain categories such as fashion or slang, using stale instances can have a negative signaling effect. However, other categories are more evergreen like movies, music, and literature. There’s a reason we still read Shakespeare in school, 400 years after his works were first published! But in the eyes of algorithms, a significant amount of these corpuses might as well not exist.

There are two reasons why this might be the case. The first is that the content may not be indexed, or uploaded to the internet in a method that systems can catalouge it in a standard way. The second is that the content may have indexed but no humans have discovered it. If no humans have discovered it, then it’s impossible for them to have added it to their interests, meaning that these pieces of content will be ignored by collaborative filtering algorithms. Additionally, it means that there are no influencer humans who are championing the content in Meatspace, eliminating yet another path to visibility.

I know what you’re thinking. Sure, this makes sense intellectually, but how common is it really for some undiscovered work to become a mainstream hit in real life rather than your stupid framework?

More common than you think! There’s the famous case of Sixto Rodriguez whose career flamed out in the US but music achieved mainstream popularity in South Africa. There’s H.P. Lovecraft, who went from being virtually invisible during his lifetime to one of the most influential science fiction writers of all-time.

One can begin to see a potential niche to be had: discovering hidden works of genius, buying the publishing rights for a song (heh), then promoting the heck out your acquisition. One can then extrapolate that this task becomes significantly easier if you develop a reputation for bringing these long-lost talents back into the limelight.

As it turns out, I’ve come across two record labels have found success by following this exact strategy: The Numero Group and Light in the Attic Records. They have built successful (albeit niche) brands among indieheads by crate-digging in record shops, discovering massively talented artists who never found commercial success or critical recognition, and attempting to give them the credit they are due.

It works. My friend Jacob Rosenberg wrote an incredible piece about the singular perfection of a a song recorded by a washed-up solo artist in a shed behind his house where it languished in obscurity for three decades before being re-issued by Light in the Attic.

My recent obsession has been with the band Indian Summer, an emo band that was kicking around Oakland for a year starting in 1993. Despite having releasing an album that Rolling Stone ranked as the 37th best emo album of all-time, I would have never discovered them if the Numero Group hadn’t re-issued their work, putting it on Spotify in the process, which in turn allowed it to find a spot in my Discovery Weekly playlist.

I call these entities “meatspace curators” because they do the hard work of trawling through older, often analog material. They “index” these works by buying the rights and publishing them online. In doing so, they make the works visible to online algorithmic engines, and solve the cold-start problem of collaborative filtering by promoting them to a small, but devoted, group of followers.

Do similar curators exist for movies and books? I don’t know of any. Perhaps there is no need for the movie industry as so few movies are released each year that is much harder for true gems to slip through the cracks. The lack of a re-issue focused publisher in the book sector is more puzzling. There are significantly more books released each year than any other form of media, and one would have to believe that there is not only money to be made through book sales but also by licensing the story rights to Hollywood if the book blows up. If you know of a publisher that fits that criteria, please let me know!