I saw this great meme today: 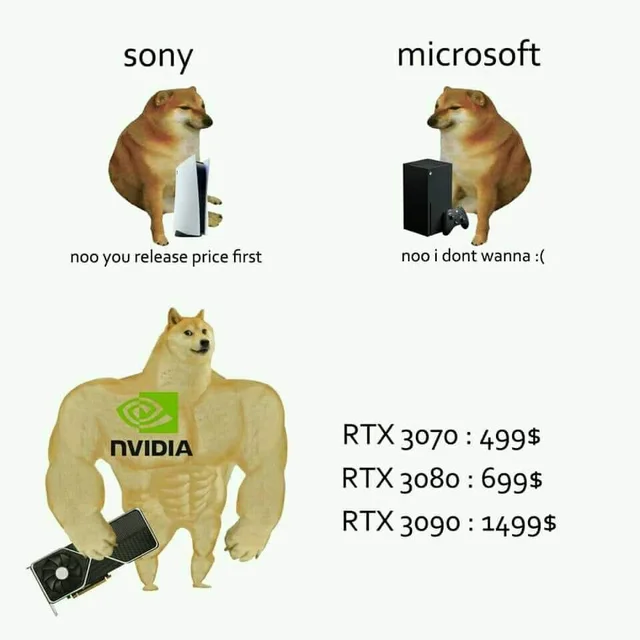 Here we are, about three months out from the biggest shopping period of the year. Both Microsoft and Sony announced their next-generation consoles with splashy livestreams. They announced off new titles, showed off tech demos, and talked up their hardware specs. But both events had one glaring omission: the price.

As it turns out, this is game theory in action. There are two main ways to make revenue in the console business: selling the hardware and taking a rake on video game sales via a licensing fee. For the most part, consoles are at feature parity. Many titles are available on both platforms and the graphics are of similar quality. Therefore, price is one of a few key differentiators between products, yet pricing the product correctly requires balancing many different factors.

We’ve seen how sensitive consumers are to price in the last two generations. Sony tried to position the PlayStation 3 as a hulking machine meant for hard-core gamers who demanded the top performance, launching their base model at $499.99. Meanwhile, the Xbox 360 base model launched at $299. The cheaper price made the Xbox more appealing for the average family, and the Xbox moved nearly double the number of units in the US when compared to the Playstation 3.

But it was Microsoft who made a pricing mistake in the next generation. They priced their console at $499, a price that was significantly higher than many expected. This was most likely to cover the cost of the Kinect sensor, which was bundled with the console at launch. Instead, it was Sony that announced that the Playstation 4 would launch ath the $399 price point that many analysts expect Microsoft to anchor at. Microsoft’s fatal mistake was to bet big on Kinect being a hit with casual gamers, even though casual gamers are much less likely to shell out big bucks for video game consoles. The PS4 has more than doubled the sales of the Xbox One.

Selling more consoles is crucial for another reason: per-unit profit. Consoles are overbuilt when first released. The hardware has to last for an entire “generation” which, on average, lasts about 5-7 years. Since the components are so cutting edge, they are expensive to manufacture and acquire. Even pricing consoles at their true cost, and taking no profit whatsoever, would mean setting a price so high that it is beyond the reach of many consumers. Manufacturers have decided it’s better to take a loss on the unit upfront in order to move more units. Why? Because the more units you produce, the cheaper the consoles are to make. Ordering more parts amortizes the huge upfront design expenses over a larger base and gives you greater negotiating power over your suppliers. Your employees get better at making the devices so your defect rate drops. These factors combine to increase your margins, which allows you in turn to cut the price of your console to make it even more attractive, which causes you to sell even more units, and so on.

The second key is that video game developers go where the gamers are. If your platform has a significant portion of the market for video games, you have more pricing power when it comes to the licensing fee you charge developers. And the larger your install base, the more games you will sell in aggregate.

Sony and Microsoft are probably just now ramping up their assembly lines for the holiday shopping boom. They’re probably only now understanding what their defect rate is and how certain design decisions are affecting the cost of the machine. Each knows the price that they would like to sell the console for. The question remains: how high can they go without getting kneecapped by the other? And is their price low enough that they can do the same to their rival? One has to wonder how long this game of chicken can go on for. But one way or another, come Black Friday, a price will be set.

I would encourage you to play around with the pricing simulator built by MIT/Sloan and read the associated case studies to develop a more intuitive feel for the forces at work.